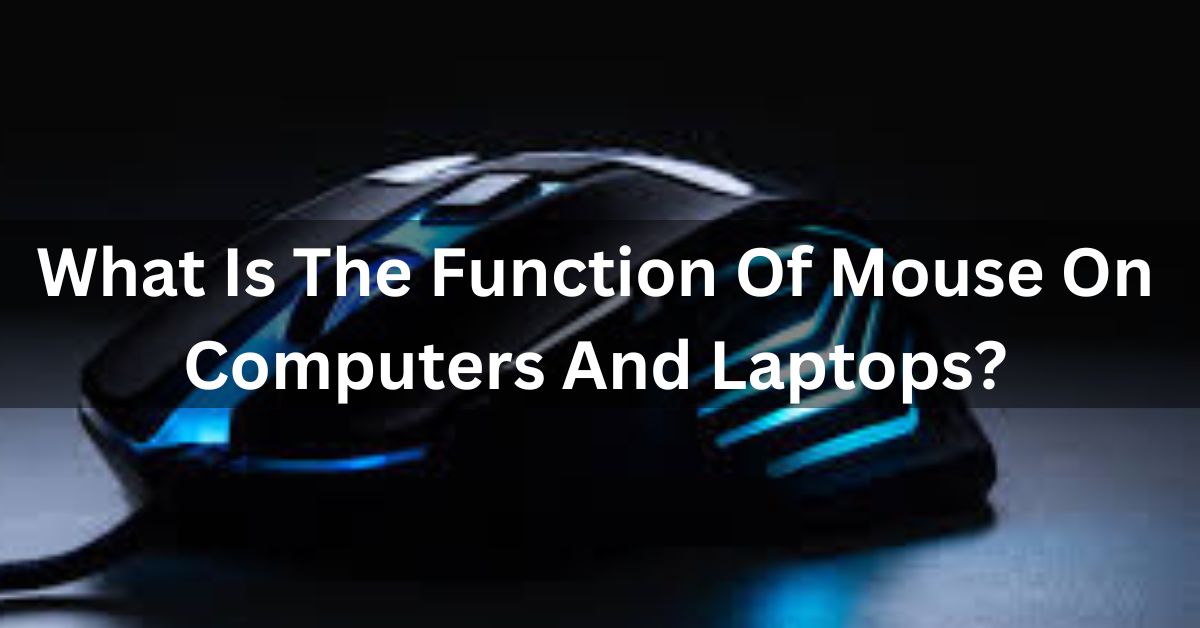 A computer mouse is a peripheral device used to interact with a computer. It is typically a hand-held device that is used to move a cursor on a computer screen.

The Mouse has been around since the early days of computing, and its function on computers and laptops has remained largely the same.

The Mouse consists of a body and two or more buttons. The body of the Mouse is typically made of plastic and houses the electronics that allow the Mouse to communicate with the computer.

A computer Mouse controls the motion of the pointer on the screen.

The Mouse is moved across the mouse pad or mat’s surface to move the cursor to the desired location on the screen.

Laptops usually have touchpads for controlling the cursor, which is built into the computer. You can move the cursor by sliding your finger across the touchpad.

However, some people find it difficult to use the touchpad because it differs from a mouse. So, they may opt to use a computer mouse instead.

A computer mouse has the same functions on both a laptop and a desktop computer. This article will explore the Mouse’s different functions in computers and laptops.

Function Of Mouse On Computers And Laptops

The Mouse is one of the important input device on a computer. It allows you to interact with the user interface and select or activate various elements on the screen. Without a mouse, it would not be easy to use a computer.

Here are some important functions of a computer mouse:

The Mouse is used to move the cursor on a computer screen. The cursor is an arrow that appears on the screen.

The Mouse allows the user to control the cursor’s position on the screen.

Open And Close A Program

The Mouse has several functions, the most common of which is to open or close a program.

The cursor is placed on the program’s icon to open a program, and the mouse button is clicked. The program will then open.

To close a program, the cursor is placed on the ‘X’ in the upper right corner of the program window, and the mouse button is clicked. The program will then close.

The Mouse can also be used to select items on the screen. To select an article on a computer using a mouse, first position the cursor over the item you wish to choose.

Then, press and hold down the left button while you move the mouse cursor over the item. The item will be selected when you release the mouse button.

The Mouse is also used to drag and drop files from one location to another. To drag and drop using a computer mouse, click on the object you wish to move and hold the button down while you move the Mouse.

The object will move along with the mouse cursor. You can then release the button to drop it in its new location.

The scroll function on a mouse is a way to navigate up and down a page or document. This is typically done by using the scroll wheel on the Mouse, but some mice also have dedicated scroll buttons.

Hovering is a function that allows a computer mouse to move over an object on a screen without selecting it.

When the cursor is positioned over a thing, it is said to be “hovering” over that object. Hovering can obtain information about an object without actually selecting it.

Example: Many computer applications have tooltips that appear when the cursor hovers over a particular object. These tooltips provide information about the thing without the need to select it.

Some mice have additional buttons modified for gaming. There are a few key functions that a mouse plays in gaming.

Thirdly, the Mouse can control the camera in some games. These functions combine to create a more enjoyable gaming experience.

How Does Mouse Work on Laptops and Computers?

Both mechanical and optical mouse work according to their construction. We all know how to move the mouse cursor around the screen using the trackpad or mouse.

The computer mouse converts the movements of the hand into electronic signals. These signals are then used to move the pointer on the screen. The Mouse can move the pointer in any direction, including up, down, left, and right.

A mechanical mouse works by having a ball roll beneath it as you move it across a surface. This ball is linked to two plastic wheels, the x-axis, and the y-axis.

Together, these two wheels allow the Mouse to track your movements across a surface and translate them into cursor movements on a screen.

An optical mouse detects movement using a light source, a laser, a photodetector (a CMOS sensor), and a digital signal processor (DSP).

An optical mouse uses a light-emitting diode (LED) to shine a light on the surface upon which the Mouse is moving.

The light is reflected and picked up by a photodetector, a complementary metal-oxide-semiconductor (CMOS) sensor.

The CMOS sensor uses the reflected light to form microscopic images of the local surface. These images are then analyzed by a digital signal processor (DSP) to track the Mouse’s movement. By doing this, the Mouse can detect the slightest movement and track it accordingly.

The PC Mouse comes in various shapes and sizes, and many have additional buttons that can be programmed for different functions.

These buttons are typically located on the side of the Mouse. Users can customize their Mouse buttons to better suit their needs by programming these buttons.

Example: A user may program a button as a shortcut for a frequently used function. This can be a great time-saver, as the user can press the button rather than having to navigate to the function through the menu system.

Many mice also come with a wireless USB dongle, which allows you to use the Mouse without a cable.

As technology advances, more ergonomic computer mouse models are becoming available that are designed to fit the hand more comfortably.

This is beneficial for users who spend long hours using a mouse, as it can help to prevent strain and discomfort.

In conclusion, the function of a mouse is to provide an input device for computers and laptops that allows users to interact with a graphical user interface (GUI).

The Mouse essentially allows the user to control the pointer on the screen to select or open files, click on links, or perform other actions.

Mouse works by converting the movement of hands into an electrical signal that computer can understand.

Mechanical mice use a ball that physically rolls as you move the Mouse. This ball moves two rollers inside the Mouse, which translate the motion. Optical mice, on the other hand, use a laser to track movement.

The computer mouse has many specifications, such as customizable buttons that increase th efficiency of work and more ergonomic designs for preventing discomfort.

While the function of a mouse may seem relatively simple, it is an essential component of most computers and laptops.

How To Connect Two Keyboards To One Computer For Gaming?

Why Do Pros Play With The Keyboard Sideways?

How Much To Replace Laptop Keyboard?

How To Make Keyboard Cover Stick?

How To Print Screen On Logitech Wireless Keyboard?

How To Use The Wireless Mouse Without A Receiver

A computer mouse is a peripheral device used to interact with a computer. It is typically a hand-held device that…